The metadata section has 9 entries. All entries must go in the second column (column B if using a spreadsheet program such as MS Excel). 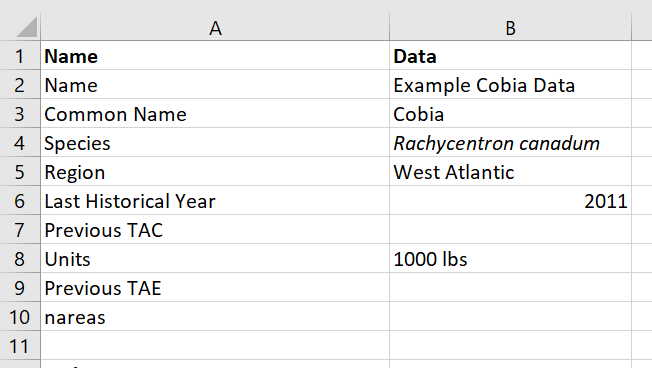 Use in-text citations where possible and include references under the “## Reference List” section.

Do not delete or modify the “## Metadata” heading.

Text entry. A unique name for this data file.

Text entry. The common name of the species.

The example data file is for data from a fishery for cobia.

Text entry. The scientific name of the species.

The example data file includes the species name for cobia.

Text entry. The region of the fishery.

The example data file assumes the fishery is in the Western Atlantic.

Numeric entry. The calendar year of either:

The last historical year was 2011 in the example (Figure @ref(fig:metadata)).

There was no existing TAC for the example cobia fishery.

Text entry. The units of the TAC and catch data, e.g., ‘thousand tonnes’. Leave blank if no TAC or catch data exists.

The catch data in the example fishery is in units of ‘1000 lbs’.

There was no existing TAE for the example cobia fishery.

Numeric entry. The number of spatial areas used in management. Only used for management procedures that set spatial closures. Leave blank if no spatial management is used or proposed. Don’t enter 0 or 1.

The default value is 2 areas, which will be used if no value is entered here.

There is no spatial management for the example cobia fishery.